SCP-409, or the "Contagious Crystal", is a SCP object that can be encountered in Project Resurrection, and Box of Horrors. It was added in v0.1.0.

SCP-409 resembles a large quartz crystal approximately 1.5m (5ft) tall and 0.6m (2ft) wide. Any objects coming in contact with SCP-409 will begin to crystallize after three hours. This effect will occur in any material other than granite. The crystallization will spread by approximately 2.5cm (1in) per minute, and will convert the entire object or organism, inside and out. Subjects report this effect to be extremely painful, and similar to frostbite. After complete crystallization, the object will begin to make snapping and creaking noises for approximately twenty minutes, before bursting into thousands of fragments with great force.

SCP-409's containment chamber can be found in the Heavy Containment Zone. Upon entering the chamber, the player will find a dead crystalized body with or without SCP-005 and SCP-409 on a granite box pedestal.

If the player comes into contact with SCP-409's quartz crystals, a message will appear later on, alerting the player that they have been infected. The longer the player is infected with SCP-409, the more opacity the crystal in the player's vision will become. Should the player fails to find SCP-500 pill, they will be shattered into crystals.

SCP-409 can be dispensable by SCP-294, drinking it will give the same effect. 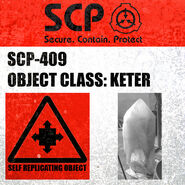 The new label outside the elevator 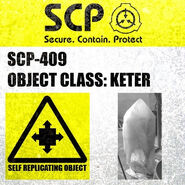 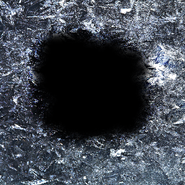 Texture used when the player becomes infected with SCP-409. 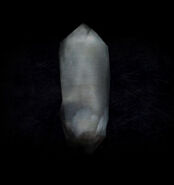 SCP-409's Document
Add a photo to this gallery
Retrieved from "https://scpcbprojectresurrection.fandom.com/wiki/SCP-409?oldid=311"
Community content is available under CC-BY-SA unless otherwise noted.